Water, Flooding & Sustainable Drainage: What We Can Learn From Jackson, MO 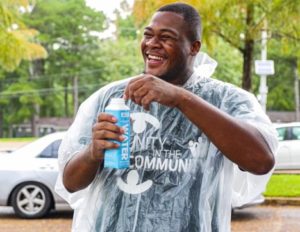 Torrential rains and storms have battered the South of late; the severity of the Jackson water crisis has justifiably dominated the news, but recent weather events throughout the South have left many cities across the country wondering if they will be next and how their region will fare.

Dallas, St. Louis and other Southern regions have been hit with historic downpours in the past handful of weeks – no less than five ‘1,000-year rain events’ in as many weeks. Then, when the rains came to Jackson, they proved too much for the city’s already-failing water system to contend with, leaving its 150,000 residents without clean, safe water.

The complexity of managing flood events cannot be understated, as each area’s unique topography and the extent to which it is built-out can significantly impact the level of damage caused. Furthermore, these latest events are shining an all-important spotlight on the state of America’s water and stormwater infrastructure, and what we must learn from this latest Jackson disaster.

According to Jackson Mayor, Chokwe Antar Lumumba, this latest water crisis was inevitable given that the  city’s water infrastructure has been grossly underfunded and in a state of severe disrepair for decades.

Jackson’s failing water systems were overwhelmed by recent flood waters, putting pressure on a struggling water treatment plant system, causing pump failures that have left residents with no access to clean drinking water. WIth the majority of Jackson residents being black, the length and breadth of these fundamental infrastructure issues has left many concluding that systemic and environmental racism is at play.

President Biden has made an emergency declaration for Jackson, as thousands of towns, cities and businesses across the nation send in assistance. Cities such as Houston have sent truckloads of drinking water to the people, while eCommerce giants such as Amazon and water-specialist businesses like JUST Water are also sending in large volumes of donated water to Operation Good.

The severity and frequency of these recent weather events spells out in no uncertain terms that the climate is continuing to change.

Rain events that may have once been considered to be a one-in-500 year event are fast-becoming significantly more frequent, and the reason is clear. As the global greenhouse gas emissions increase, so too do average climate temperatures around the world. This warming results in the increasing frequency and severity of precipitation, thus increasing the risks of flooding and the damage they create.

The recent floods in Jackson are a stark example of how vulnerable some communities are to the impact of flood waters.

According to the American Society of Civil Engineers, the state of America’s drinking water infrastructure is cause for alarm, with the systems receiving a woeful C-minus in its latest report card.

This report stated that the nation’s ‘aging and underfunded’ water infrastructure suffers water-mains breakages every other minute, resulting in a staggering 6 billion gallons of treated water every day – the equivalent of 9,000 swimming pools’ worth of clear water.

Furthermore, America’s stormwater infrastructure is reportedly in an alarming state of disrepair. Engineers warn that the majority of these systems across the country do not have access to the funding necessary to make improvements sufficient to withstand the inevitable increase in severe weather events.

One of the major factors that worsen flooding is the extent of pavement and built-up areas present in urban areas, as water cannot be absorbed in such environments and quickly runs off into overwhelmed stormwater systems.

With well-designed and maintained water infrastructure in place, the extent of damage caused by flooding can be greatly reduced. Research is finding that the engineering specifications for much of America’s drainage pipe infrastructure is no longer adequate to meet the demands that this increasing storm severity brings.

Urban flooding is majorly impacted by the increased percentage of impermeable surfaces created by building development and paving. When intense water volumes cannot infiltrate into the soil, runoff waters increase dramatically in volume, causing stormwater and sewer systems to overflow, as well as rivers, streams and other waterways.

The warming climate and subsequent increase in the severity and regularity of unrelenting rains will inevitably result in continued water crises across the nation and now is the time to take action. The global climate crisis must be taken seriously if we are to create any change, but simultaneously, water infrastructures need to be redeveloped in a more sustainable way.