Businesses and Individuals Work Towards Achieving Their Sustainability Goals in Innovative Ways: Find Out How Drones Can Help Meet Those Goals 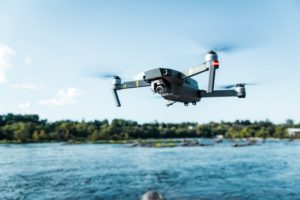 In February, Business Wire reported that Edge unveiled swarming drones on the first day of the Unmanned Systems Exhibition and Conference (UMEX 2022) in Abu Dhabi, United Arab Emirates. When drones make headlines, it’s usually in the context of defense and warfare, but unmanned aerial vehicles can help businesses and individuals meet their sustainability goals.

Whether you consider practical applications in an urban environment, such as delivery, or land management and conservation outside city bounds, drones can be a powerful ally. They can support data collection, maintenance of photovoltaic plants and wind turbines, and more.

Whether your business or you as an individual rely on renewable energy such as wind turbines or solar panels, drones can help make monitoring and maintaining them more efficient. According to Dronegenuity, those energy sources must be inspected regularly to check for breakdowns and other problems.

However, those inspections require human resources and a fair amount of time. By flying drones up to turbines or panels, it’s possible to spot potential problems in significantly less time than it would take a team of people to do so manually.

Drones can revolutionize the way businesses deliver products to customers. Currently, small deliveries such as pizzas are made by vehicles that contribute to air pollution. Drones could not only decrease the amount of air pollution but also lower the number of cars, bikes, and other vehicles on the roads.

According to PrecisionAg, drones can play a powerful role in sustainable agriculture. Individuals and businesses can use them to monitor crops, trace products from farm to fork, and to monitor large tracts of farmland. By using data obtained from drones, farmers can make more effective decisions when considering seeding, pruning and thinning, and other activities. In addition, drone technology can help plan and monitor irrigation systems, and farmers can use them to assess damage in inaccessible areas following natural disasters such as floods or fires.

Drones can be effective tools for wildlife conservation. According to MDPI, one of their applications in conservation is to increase security in large areas by monitoring trespassers and poachers. Another application of drones is using them to track animals, especially those that pose risks to human trackers who would track them on foot. Natural disasters such as earthquakes, fires, and floods can put animals at risk. Drones can make it easier to find surviving animals and to deliver food and other aid.

The swarming drones unveiled in February is the most recent exciting development in the technology, and more innovations are on the way. This surely is a sign that drones could potentially play even more important and effective roles in helping businesses and individuals meet their sustainability goals in the future.