Sustainability in Cooperatives vs. Other Corporations 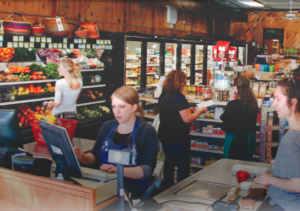 If you’ve ever ordered something from Amazon.com or bought an iPhone through Apple, you’ve engaged with a corporation. Obviously, in the U.S., buying from large companies like this is a very common occurrence and isn’t necessarily a bad thing. However, if you want to see where your money is going and make a difference, you might consider joining and frequenting more cooperatives.

Co-ops, or cooperatives, are groups of autonomous individuals who work together to meet specific economic, social and cultural needs. Often, they are smaller than corporations and are more focused on positively impacting their local community and co-op members. Currently, there are three million co-ops worldwide that employ a total of 280 million people.

As they grow in number, co-ops continue to make a huge difference in communities across the globe. The question is, how do they compare to major corporations? Are they actually more sustainable?

Unlike corporations, co-ops don’t involve a top-down management system, owners or managers. Rather, workers form a collective that uses a democratic system to make decisions and changes.

This system means co-ops provide long-term, highly sustainable employment to their members. If the cooperative experiences economic hiccups, it’ll be more likely to keep workers and work through the problem instead of immediately downsizing. Thus, co-ops are inherently more community-oriented than corporations.

Because corporations are so large, they often can’t prioritize community involvement. After all, the reason they made it to the top is likely because they prioritized their bottom line.

Co-ops, however, tend to prioritize giving back to the local community as their community gives to them. Whether they donate money to a local charity, volunteer to clean up the neighborhood or sell crops from local farms, many co-ops continuously reinvest their money and efforts at the local level.

By doing so, they put money back in the pockets of their customers and members and promote a circular economy. Ultimately, this system creates more local wealth and jobs, making it more sustainable than a corporation.

Co-ops are also active players in preserving their community’s environment. Many food co-ops, for instance, pride themselves on offering organic and whole foods. Others prioritize recycling, repurposing and minimizing waste.

Large corporations have recently involved themselves in environmental conservation, especially as shoppers demand greener, more sustainable products. However, cooperatives are able to make a bigger difference locally and refuse to treat the environment as an externality, as its health directly impacts them and their affairs.

As sustainable as co-ops may seem compared to corporations, they still have their fair share of limitations and challenges. One of its biggest might be the thing that makes it so special — its collective autonomy.

Since everyone is technically on the same level, there’s often a general lack of expertise. Some may appoint board members from the community who are less knowledgable than a manager might be. Plus, since each person has one vote only, those who know better might be swept under the rug and, along with them, the success of the co-op.

Additionally, since there isn’t any single person who has the final say in matters, co-ops likely have more disagreements and take more time to reach a consensus. Getting a majority to agree on sustainable practices can be nearly impossible if members don’t value it.

Their small size can hinder their impact, as well. While it may be helpful to keep capital within the community and develop local sustainability initiatives, they can only do so much on their own. Without growing into a large corporation, they could be unable to make a difference on the global or national stage.

Moreover, they may struggle to prove their sustainability, because every co-op defines the term differently. There is no real standard. Thus, collecting quantifiable data can be nearly impossible and change may be difficult to measure or even see unless you’re a member.

Still, co-operatives serve a unique purpose within their local communities and meet specific needs that corporations simply never could. Regardless of how small they may be, they still hold a fair amount of global market share. In fact, nearly 45% of co-ops have a turnover of 100 million dollars, making them key players in the global economy and in developing sustainable solutions.

Consequently, they’ll likely have important roles to play as the world looks to become even more sustainable in the coming years.

Bio:  Emily covers topics in sustainability, conservation and green technology. You can read more of her work on her blog, Conservation Folks.